Here's some timely news. A car just crashed into my house. I was settling in at about 11:40, doing some reading just before dropping off when I heard tires screeching, a loud bang (my neighbor's house) and a loud thud (my house). This is no joke. I went outside and saw a smashed-up car settled against my front deck. There was a guy inside flailing about. I told him I'd help then went back inside and put some slippers on (still in my t-shirt and shorts) and returned outside. By now a bunch of neighbors were out, calling 911 and gawking. The kid was out of the car, healthy, and I could tell he wanted to run. I crowded him and told him he wasn't smashing into my house and running. The guy from across the street helped. Then the kid tried to make a break for it and we, plus my next-door neighbor (whose house took the brunt of the blow) restrained the kid. About then the ambulance guys showed up, then seconds later the cops. I went back and got dressed, it's 20F out there. Wait, cops just now came to my door for personal info. Okay, it looks like the car came in fast from the north, and a little sideways (there's MAJOR skid marks on the neighbor's sidewalk), hit the (fairly new) concrete porch of my neighbor (west side of house), then swung around 360 counter-clockwise thudding against my deck, about two feet from the natural gas intake. Jack and Henrietta have enough car parts in their yard to open a parts shop. The car is still where it came to rest so I can't be sure, but it looks like it only barked up the side of my deck a little bit. I'll get a good look tomorrow. Oh yeah, the car's at rest about seven feet from where my head was. Well, they just hauled it off and I got a good look the the deck. Just scraped up on the side. Glad to blog this as I can't call anyone at this hour and I feel like sharing.

UPDATE: Just took a good look. The 2x10 piece that supports the planks on the side of the deck (probably has a name, I just don't know it) is definitely cracked and the bottom 80% pushed in about 1/2 inch. Still about the least damage possible for getting your house run into by a car. Also some broken glass strewn about, and one CD lying on the deck titled 'Vertigo Juares - 2001'. It starts with some idiot screaming 'face down, ass up, that the way we like to fuck!' about ten times. The next 26 tracks are ugly, ugly techno-pop. Hell, this might have been a suicide attempt. Next time he should just push the eject button.

This is like the Terrorist Threat Level but even funnier. For instance, here's the text for 'Guarded' level:

GUARDED
Meaning - We are quite offended, because people are generally picking on us.
Non-Muslim response - Stop making jokes about us
Consequence of non-compliance - We will rant on about "Islamophobia" and "Orientalism", although we don't understand what those words really mean 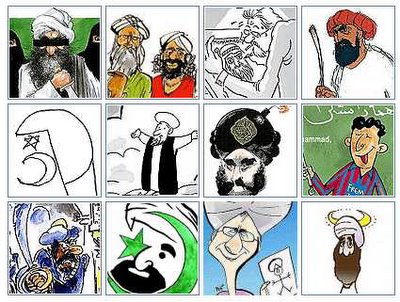 I just cribbed this from Combs Spouts Off. Wanted to share it with the world in my own small way. Thanks Richard. Just wish I had the three fraudulent ones added in by the Muslim 'holy man'.

Instapundit discusses "who's more fanatical - left or right?" and references Janes Law - " The devotees of the party in power are smug and arrogant, the devotees of the party out of power are insane". Pretty good stuff. Then, at the end of Jane's comments is the real payoff - a link to a series of essays on evolutionary psychology addressing such questions as "Why women have breasts", "Why I hate chimps", "Why samurai killed themselves" and much, much more. Really delicious.

Then Eric Raymond hits one out of the park, his best since the seminal "The Cathedral and the Bazaar". This time he addresses the most destructive memes in our political culture and traces their roots to the Cold War. It's an amazing story, still developing as the old Soviet archives are aired. Here's a sample:

"The most paranoid and xenophobic conservatives of the Cold War were, painful though this is to admit, the closest to the truth in estimating the magnitude and subtlety of Soviet subversion. Liberal anticommunists (like myself in the 1970s) thought we were being judicious and fair-minded when we dismissed half of the Right’s complaint as crude blather. We were wrong; the Rosenbergs and Alger Hiss really were guilty, the Hollywood Ten really were Stalinist tools, and all of Joseph McCarthy’s rants about “Communists in the State Department” were essentially true. The Venona transcripts and other new material leave no room for reasonable doubt on this score.

While the espionage apparatus of the Soviet Union didn’t outlast it, their memetic weapons did. These memes are now coming near to crippling our culture’s response to Islamic terrorism."

"The first step to recovery is understanding the problem. Knowing that suicidalist memes were launched at us as war weapons by the espionage apparatus of the most evil despotism in human history is in itself liberating. Liberating, too, it is to realize that the Noam Chomskys and Michael Moores and Robert Fisks of the world (and their thousands of lesser imitators in faculty lounges everywhere) are not brave transgressive forward-thinkers but pathetic memebots running the program of a dead tyrant."

You should read the whole thing.

One last thing I learned recently, from The Ministry of Minor Perfidity:
"There has never been a major world leader named 'Floyd'.” Maybe that's a good thing.

I can't really remember, but life must have been very boring before the Web.

A bunch of leftish bloggers have accused Bush II of 'packing' the supreme court because he selects Justices with whom he has an ideological affinity. Duh!!! Sometimes they also throw in some nonsense about the purported principle of 'balance'. Even John Kerry got into the act. Well, I've go news for you. Bush doesn't know the first thing about packing the court. For a real example, and by the way a clear attempt to completely subvert the Constitution, check out FDR.
The Courts were getting in the way of some of his New Deal proposals so he decided to add extra justices to the bench. Here's a great reponse from a contemorary journalist. A few notches above what we get from today's MSM. Packing? Good lord, what next? Hijacking foreign policy?

I've been up to my uhhh, elbows, yeah, elbows in alligators this last week.

Long story short, Matthews talked 33.8% of the time on Wednesday, 27.8% on Thursday and 36% on Friday for a weekly average of 32.95%. Compare this to the O'Reilly creature at 39.2%. And consider that while he barks a lot, Matthews asks long questions that are filled with detail and background, while O blurts out his emotional state and idle speculations and demands agreement.

This whole project was a little compulsive but I've proven to my own satisfaction that, by an objective standard, O'Reilly really is a gaseous buffoon. A lot of work for a pretty obvious result. What's all this make me? Anyway, another positive result is that I'm totally cured of the guy. When I surf by, there's an immediate revulsion and I surf away. That's worth something.