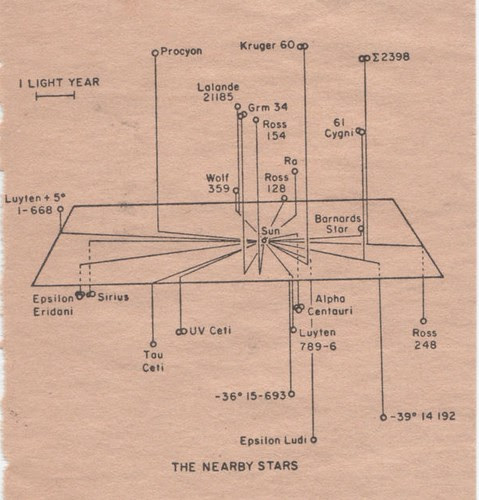 This is an OLD map of our local stars. I cut it out of a sci-fi paperback decades ago and just found it again. Some of you science fiction or even astronomy readers and writers might find it useful. I'll be glad to add attribution if anyone has the info.


UPDATE: Here's a local star map that's a little bit nicer. Be sure to zoom out also.

I've been surprised by the depth of antipathy to the idea of granting amnesty to illegal aliens. Maybe we should discuss it in terms of 'grandfathering' instead. After all, we winked at the law as much as the illegals did. Given our decades-long record of lax border enforcement and practically nil workplace policing it's unfair to suddenly uproot people who've invested years in building lives here. Let's not give amnesty, let's grandfather them in. On a related note, there are actually people who huff and puff that these people break the law every day by being in this country. Let's see, can anyone remember a drug war victim (the drug war itself being a vile outrage against our freedom and dignity) being charged not only with possession but with possession on a day-to-day basis? Have trials focused on how many days the poor soul was in possession, with a new charge for every day? Jeez, these people need to get a grip.

I've added Global Guerillas to the blogroll. The latest two entries are 'Fragmentation in India' and 'U.S. Border Collapse'. Not happy reading. The authors thesis is that the nation-state is increasingly vulnerable to systems disruption by tech-savvy guerilla fighters. For instance, he's written about the Nigerians who are shutting down that countrys oil revenue by constantly attacking the pipelines. The pipelines stretch over a large area, are easy to hit, and the cost to the central government is enormous and painful. Low cost, large 'benefit' strikes are easier than ever for guerillas everywhere. Recent entries regarding Iraq are must reads and very depressing. You need to know this stuff, so take your medicine - have a look at GG.